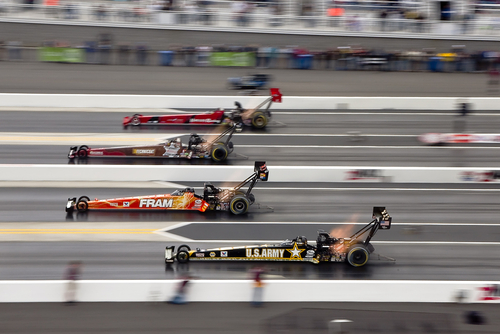 The 2018 Mello Yello Drag Racing Series hosted the inaugural NHRA Four-Wide Nationals at The Strip at Las Vegas Motor Speedway. A sell-out crowd of West Coast fans turned out to support the first ever side-by-side-by-side-by-side event. In Funny Car, the top four drivers in the points championship lined up for the final and let it rip. Tommy Johnson Jr. had a -.008 reaction time and took himself out of the running with a "red light". Number one qualifier Courtney Force was late off the line with a .103 RT and was done. JR Todd ran a 4.041 at 317.05 mph in his DHL Toyota Camry to beat Jack Beckman and claim the eleventh win of his career.

When the Top Fuel dragsters took to the track, number one qualifier Tony Schumacher, three-time world champion Antron Brown, Doug Kalitta and Steve Torrence staged for the fourth Final event of the season. Kalitta had the best RT .040 but he and Antron Brown were both out of the power early in the run. That left a hard charging Torrence in his Capco Contractors dragster to barely edge out Schumacher with 3.771 ET for 326.63 run over Schumacher's 3.790 at 325.22 mph. This was the 18th Wally for Torrence and the second of the year moving him to the top of the points standings.

The Pro Stock finals saw a couple of new names running upfront as Deric Kramer, Chris McGaha and Vincent Nobile joined Bo Butner at the tree. With everybody needing to pick up points early in the season toward the Countdown to the Championship, the Pro Stock event produced some of the closest racing of the day. McGaha was out of the gate a little too early with -.014 RT and red lighted but Nobile's .019 RT would be enough to take down the #1 Speed Dawg (Butner) as well as Deric Kramer. Nobile ran 210.44 in his Harlow Sammons Camaro to pick up his 11th career victory.

Teams have a week off before the 2018 NHRA Mello Yello Drag Racing Series season continues at Royal Purple Raceway in Houston, Texas April 20-22.