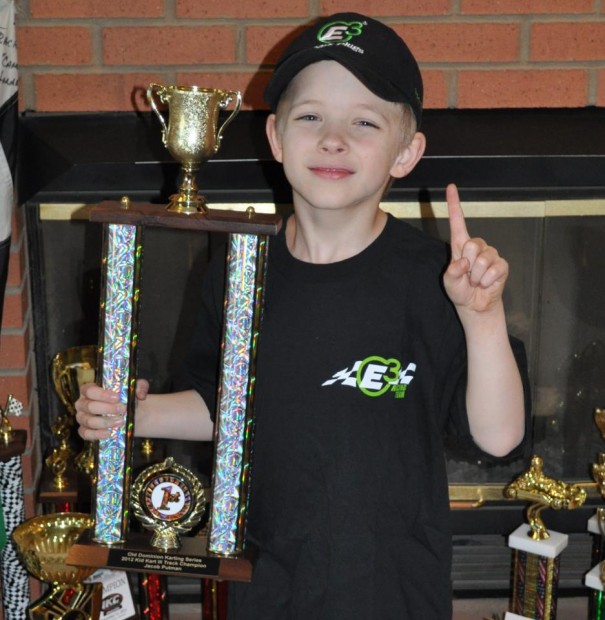 Jacob “Camokid” Putman is burning up the tracks. making a name for himself at just six years old.

Since the ripe old age of four, Jacob “Camokid” Putman has been chasing a very grownup dream, leaving competitors with more age and experience in the dust. Now, at 7 years old, he’s back for his second year of Team E3 Racing sponsorship and ever closer to a future pro racing career.

The Kid Cart champ who turns seven next month made his racing debut in October of 2010 at just four years old at Old Dominion Speedway (ODS) in Manassas, VA. With a solid fourth-place finish, he convinced his parents, competitors and track officials that he was a natural behind the wheel. He started the next season in Kid Kart 1, but so put his competitors to shame that officials recommended his parents move him up to Kid Kart 2. Head-to-head against older boys with at least two years of experience, he again proved his mettle on the track, finishing the season second in points at King George Speedway and landing the season championship at ODS

That same year, he also finished 8th of 13 karts at the Annual Kid Kart Nationals in St. Louis, MO, joined the Excel Racing team for the 2012 season and formed his own team, J&D Outlaw Racing, with friend and competitor Donald Whorton. The 2012 season also proved a great one for Putman, who again scored the ODS season championship winning nine races in a row. He also scored his first win in the Great Lake Sprint Series. The youngest competitor on the track, he finished his rookie GLSS season sixth in points.

Not bad for a first grader.

Putman starts the 2013 racing season with back-to-back ODS series championships and has his sights set on a GLSS championship. We here at E3 Spark Plugs have no doubt he’ll finish strong. After all, this is a kid who eats, breathes and lives racing – literally and virtually, his parents say.

“If he not on the track, he is at home on X-Box, Play Station, Sims or I racing,” said dad, Vince Putman, also a racer.  He noted that this will be Putman’s last year in Kid Kart, as he’s moving up to the big leagues in 2014.

Meanwhile, “Jacob does a very good job giving away E3 shirts and hats and flashlights and spark plugs to his competitors and lets them know E3 Spark Plugs or part of his winning formula,” Vince Putman said.

For that, we thank Jacob and welcome him once again to Team E3 Racing.