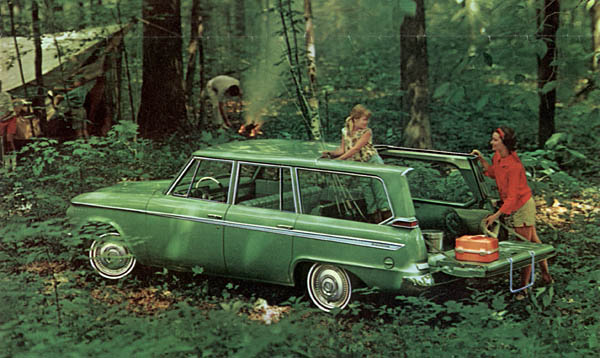 Back in the day, you probably sunk down below window level, praying that your super cool friends wouldn’t see your mom was dropping you off at school / the ballpark / the skating rink / the mall in the family station wagon. Lame! But fast forward a decade or two and the power of nostalgia kicks in, transforming the station wagon of your childhood from a thing of shame to a thing of beauty.

Okay, so maybe “beauty” is a stretch for some models. But over the decades, station wagon enthusiasts continue to sing the praises of this uniquely American vehicle that started out not as a family ride, but a track-bound workhorse. And now, there’s a documentary to help spread the love. Produced by students of the Documentary Film Program at Wake Forest University, Wagonmasters tells the story of the iconic station wagon as it represents a changing America over the last one hundred years.

“The car that was once the quintessential image of the American Dream is all but dead – at least for most people,” the film’s website reads.

The station wagon got its name from its earliest use – a specialized vehicle designed to carry people and luggage to and from train stations in the late 1910s, when travelers lugged steam trunks or wooden, cowhide-covered suitcases (the wheeled suitcase wouldn’t be invented for another half-century). But families soon saw the appeal in the larger, enclosed vehicles for much more than trekking to the train station. In 1922, Durant Motor Co.’s Star Station Wagon became the first of its kind to be offered directly to consumers from the factory of a major auto company. Since then, the station wagon has undergone scores of design evolutions.

Today’s wagons bear an ever sleeker look than their predecessors. While the few in production blur the lines between classic station wagons, crossover SUVs and hatchbacks, one thing’s for sure – the BMW 328i Sports Wagon ain’t your grandma’s grocery getter.

Wagonmasters will be shown July 28 at the Concours d’Elegance at St. John’s in Plymouth, Michigan as part of a works-in-progress screening. The Concours d’Elegance showcases rare and unique automobiles, and this year’s featured category is the “Jet-Age Station Wagon. In the meantime, watch the trailer below and see a few of E3 Spark Plugs‘ favorite wagons. Then, post your top picks on the E3 Spark Plugs Facebook fan page.