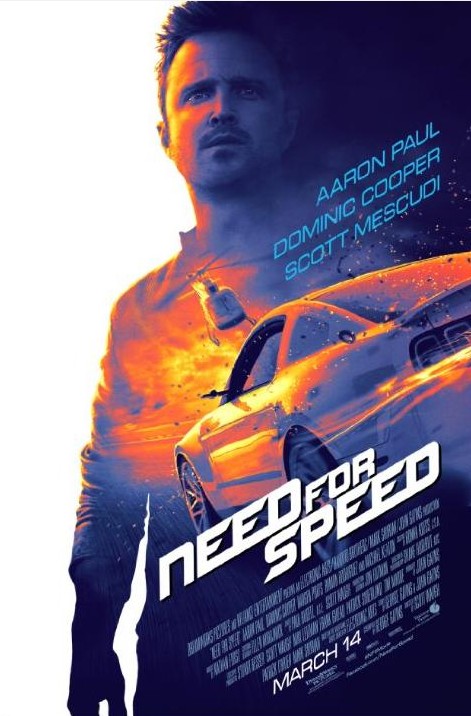 This is one that fast car enthusiasts, film fans and gamers have been waiting for. The video game-inspired feature film Need for Speed, starring Aaron Paul of Breaking Bad fame and Dominic Cooper, hits movie theaters nationwide this Friday, March 14.

The film adaptation of the enduringly popular game series is the story of street racer Tobey Marshall. Fresh from prison, he joins a cross-country race, bent on revenge against the wealthy business associate who framed him. Meanwhile, little does he know that his ex-partner has learned of the plan and placed a massive bounty on Marshall’s head as the race begins. Need for Speed is described as “a fast-paced, high-octane film rooted in the tradition of the great car culture films of the 70s while being extremely faithful to the spirit of the video game franchise.” But producers and critics promise this is no formula fast car flick.

It’s clear that Paul has honed his skills in front of the camera, and since the much-ballyhooed series finale of Breaking Bad, he’s apparently developed his talents behind the wheel, too – that according to his appearance in a recent episode of the internationally popular car show Top Gear. In the show’s Star in a Reasonably Priced Car segment, Paul floored it around a track in a red Vauxhall Astra, impressing the show’s hosts with a 1:44:7 time. Despite a scary moment when he broke too hard heading into a turn, Paul topped the show’s celebrity leaderboard, beating AC/DC’s Brian Johnson and singer-songwriters James Blount and Joss Stone.

In Need for Speed, you’ll see a bit of that behind-the-wheels talent as Paul aggressively handles some seriously fast rides, including a Ford Mustang powered by a supercharged 900HP V8 with a custom body based on the Shelby GT500.A few other automotive stars making appearances are a Bugatti Veyron Super Sport, Koenigsegg Agera, Lamborghini Sesto Elemento, McLaren P1, Saleen S7, and even a rare GTA Spano.

Take a look at the film’s trailer and post your thoughts on the E3 Spark Plugs Facebook Fan Page.